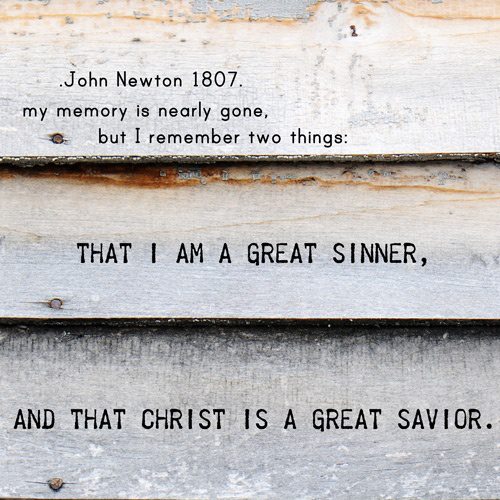 “My memory is nearly gone,
but I remember two things:
That I am a great sinner
and that Christ is a great Savior.”
– John Newton, 1807

Powerful commentary on Newton and Amazing Grace from the video above which features Scottish bagpipe accompaniment of this blessed hymn:

John Newton was a slave trader. He trafficked thousands of men, women and children from Africa to the Auction blocks.

In 1748 a violent storm threatened to sink his ship and he fell to his knees and prayed to God for mercy. It was that night that John Newton sensed there is a God who hears and answers prayers… even for the worst of men.

Over time Newton repented as a preacher and writer of hymns. In 1772 he wrote a hymn called Faith’s Review and Expectation. A song that you know as Amazing Grace. It became perhaps the most popular song in history.

A song with a few notes lifts the heads of the hopeless, softens the hearts of the hardened.

Amazing Grace was sung by both sides of the civil war and used as a requiem by the Cherokee Indians on the Trail of Tears.

Civil rights protestors sang it defiantly during freedom marches and on that sweltering August day when Dr. King shared his dream.

Amazing Grace rang out when Nelson Mandela was freed from prison and when the Berlin Wall came crumbling down.

On September 11th, Amazing Grace was sung to comfort a mourning world.

It was sung when the Saints marched back into the Superdome after Hurricane Katrina reviving the spirit of a fallen city.

Grace has power to transform, to right wrongs, to turn a man who once traded slaves into one who fought for their freedom.

Through many dangers, toils and snares
We have already come
Twas grace that brought us safe thus far…
And Grace will Lead us home.
-John Newton

A short bio of his life can be found here. Further reading, images, and videos available here.

Place yourself in the hands of this loving God. Be a sinner saved by grace. He was prepared to save you an eternity ago. Allow His grace to lead you home.

Peace in Christ and a blessed Easter weekend to you all.

Sanctuary Sunday is a Sunday blog series focusing on matters of faith, spirituality, wisdom, and the Journey.

One thought on “Two Things…”